The artillery wheel was developed for use on gun carriages when it was found that the lateral forces involved in horse artillery manoeuvres caused normally constructed cart wheels to collapse. Rather than having its spokes mortised into a wooden nave (hub), it has them fitted together (mitred) then bolted into a metal nave. Its tyre is shrunk onto the rim in the usual way but it is also bolted on for security. A normal wagon wheel is dished so that in its lowest part, the spokes are perpendicular to the ground thus supporting the weight (with the axle not truly horizontal but angled downward toward the outside about 5 degrees). This is not done with artillery wheels.

When higher speeds and consequently higher lateral forces were attained with the introduction of motor vehicles, the artillery wheel was used in those too. By the 1920s, motor cars used wheels that looked at a glance like artillery wheels but which were of forged steel or welded from steel pressed sections. These too were usually called artillery wheels. 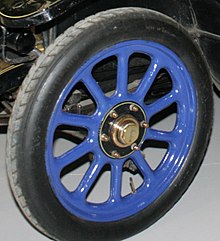 As a result of complaints from motor manufacturers about the wooden wheels on these early cars disintegrating upon touching any roadside kerb,[1] In 1908 Sankey with his works manager, Wingfield Burton, developed and patented the first pressed-steel and welded detachable motor car wheel.[2][1] Production started in 1908, with customers including Herbert Austin and, later, William Morris.[1] In addition to his original factory at Bilston a new plant was established near Wellington, Shropshire, which was devoted to wheel production.[1]

In 1920, GKN purchased steel company John Lysaght and their subsidiary, Joseph Sankey and Sons Ltd.[1] By that time the plant was supplying wheels to many UK manufacturers.[1]

By the late 1920s the inadequacies of artillery wheels had brought about their sweeping replacement by the more expensive wire wheels.

Tags:
Wheels
Next Alloy wheel
Все записи
Previous Tweel
Close
AutoSystemPro.com is a participant in the Amazon Services LLC Associates Program, an affiliate advertising program designed to provide a means for sites to earn advertising fees by advertising and linking to amazon.com.
Scroll To Top