In petrol engines, it is used in Gasoline direct injection (GDI) engine technology.

The common rail system prototype was developed in the late 1960s by Robert Huber of Switzerland and the technology further developed by Dr. Marco Ganser at the Swiss Federal Institute of Technology in Zurich, later of Ganser-Hydromag AG (est.1995) in Oberägeri.

The first successful usage in a production vehicle began in Japan by the mid-1990s. Dr. Shohei Itoh and Masahiko Miyaki of the Denso Corporation, a Japanese automotive parts manufacturer, developed the common rail fuel system for heavy duty vehicles and turned it into practical use on their ECD-U2 common-rail system mounted on the Hino Ranger truck and sold for general use in 1995.[2] Denso claims the first commercial high pressure common rail system in 1995.[3]

Modern common rail systems, whilst working on the same principle, are governed by an engine control unit (ECU) which opens each injector electrically rather than mechanically. This was extensively prototyped in the 1990s with collaboration between Magneti Marelli, Centro Ricerche Fiat and Elasis. After research and development by the Fiat Group, the design was acquired by the German company Robert Bosch GmbH for completion of development and refinement for mass-production. In hindsight, the sale appeared to be a strategic error for Fiat, as the new technology proved to be highly profitable. The company had little choice but to sell Bosch a licence, as it was in a poor financial state at the time and lacked the resources to complete development on its own.[4] In 1997 they extended its use for passenger cars. The first passenger car that used the common rail system was the 1997 model Alfa Romeo 156 2.4 JTD,[5] and later on that same year Mercedes-Benz introduced it in their W202 model.

Common rail engines have been used in marine and locomotive applications for some time. The Cooper-Bessemer GN-8 (circa 1942) is an example of a hydraulically operated common rail diesel engine, also known as a modified common rail.

Vickers pioneered the use of common rail injection in submarine engines. Vickers engines with the common rail fuel system were first used in 1916 in the G-class submarines. It used four plunger pumps to deliver a pressure of up to 3,000 pounds per square inch (210 bar; 21 MPa) every 90 degrees of rotation to keep the fuel pressure adequately constant in the rail. Fuel delivery to individual cylinders could be shut off via valves in the injector lines.[6] Doxford Engines used a common rail system in their opposed-piston marine engines from 1921 to 1980, where a multi-cylinder reciprocating fuel pump generated a pressure of approximately 600 bars (60 MPa; 8,700 psi), with the fuel being stored in accumulator bottles.[7]Pressure control was achieved by means of an adjustable pump discharge stroke and a “spill valve”. Camshaft-operated mechanical timing valves were used to supply the spring-loaded Brice/CAV/Lucas injectors, which injected through the side of the cylinder into the chamber formed between the pistons. Early engines had a pair of timing cams, one for ahead running and one for astern. Later engines had two injectors per cylinder, and the final series of constant-pressure turbocharged engines were fitted with four injectors per cylinder. This system was used for the injection of both diesel oil and heavy fuel oil (600cSt heated to a temperature of approximately 130 °C).

The automotive manufacturers refer to their common rail engines by their own brand names: 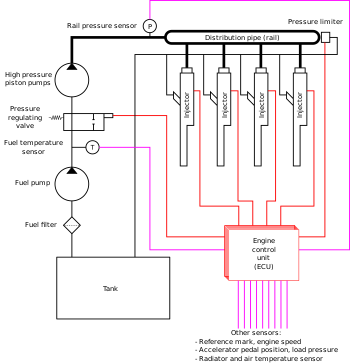 Diagram of the common rail system

Solenoid or piezoelectric valves make possible fine electronic control over the fuel injection time and quantity, and the higher pressure that the common rail technology makes available provides better fuel atomisation. To lower engine noise, the engine’s electronic control unit can inject a small amount of diesel just before the main injection event (“pilot” injection), thus reducing its explosiveness and vibration, as well as optimising injection timing and quantity for variations in fuel quality, cold starting and so on. Some advanced common rail fuel systems perform as many as five injections per stroke.[9]

Common rail engines require a very short to no heating-up time, depending on the ambient temperature, and produce lower engine noise and emissions than older systems.[10]