A crank is an arm attached at a right angle to a rotating shaft by which reciprocating motion is imparted to or received from the shaft. It is used to convert circular motion into reciprocating motion, or vice versa. The arm may be a bent portion of the shaft, or a separate arm or disk attached to it. Attached to the end of the crank by a pivot is a rod, usually called a connecting rod (conrod). The end of the rod attached to the crank moves in a circular motion, while the other end is usually constrained to move in a linear sliding motion.

The term often refers to a human-powered crank which is used to manually turn an axle, as in a bicycle crankset or a brace and bit drill. In this case a person’s arm or leg serves as the connecting rod, applying reciprocating force to the crank. There is usually a bar perpendicular to the other end of the arm, often with a freely rotatable handle or pedal attached. 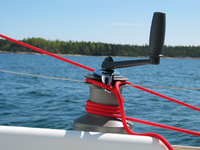 Hand crank of a winch on a sailing boat.

Hand crank on a pencil sharpener

Animation of a multi-cylinder engine

Almost all reciprocating engines use cranks (with connecting rods) to transform the back-and-forth motion of the pistons into rotary motion. The cranks are incorporated into a crankshaft. 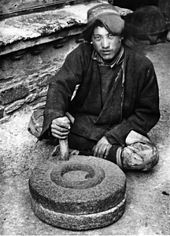 Tibetan operating a quern(1938). The upright handle of such rotary handmills, set at a distance from the centre of rotation, works as a crank.[1][2]

The earliest hand-operated cranks appeared in China during the Han Dynasty (202 BC-220 AD), as Han era glazed-earthenware tomb models portray, and was used thereafter in China for silk-reeling and hemp-spinning, for the agricultural winnowing fan, in the water-powered flour-sifter, for hydraulic-powered metallurgic bellows, and in the well windlass.[3] In order to create a handle by means of a wheel to easily rotate their grain winnowers, the Chinese invented the crank handle and applied the centrifugal fan principle in the 2nd century BC.[4][5] The crank handle was used in well-windlasses, querns, mills, and many silk making machines.[6][7] The rotary winnowing fan greatly increased the efficiency of separating grain from husks and stalks. Harvesting grain by the use of rotary winnowing fan would not reach the Western World until the eighteenth century, where harvested grain was initially thrown up in the air by shovels or winnowing baskets.[8][9] However, the potential of the crank of converting circular motion into reciprocal one never seems to have been fully realized in China, and the crank was typically absent from such machines until the turn of the 20th century.[10]

The eccentrically mounted handle of the rotary handmill which appeared in 5th century BC Celtiberian Spainand ultimately spread across the Roman Empire constitutes a crank.[12][1][2] A Roman iron crank of yet unknown purpose dating to the 2nd century AD was excavated in Augusta Raurica, Switzerland. The 82.5 cm long piece has fitted to one end a 15 cm long bronze handle, the other handle being lost.[11][13]

A ca. 40 cm long true iron crank was excavated, along with a pair of shattered mill-stones of 50−65 cm diameter and diverse iron items, in Aschheim, close to Munich. The crank-operated Roman mill is dated to the late 2nd century.[14] An often cited modern reconstruction of a bucket-chain pump driven by hand-cranked flywheels from the Nemi ships has been dismissed though as “archaeological fantasy”.[15]

Hierapolis sawmill in Asia Minor(3rd century), a machine that combines a crank with a connecting rod.[16]

Evidence for the crank combined with a connecting rod appears in the Hierapolis sawmill in Asia Minor from the 3rd century and two stone sawmills at Gerasa, Roman Syria, and Ephesus, Asia Minor (both 6th century).[16] On the pediment of the Hierapolis mill, a waterwheel fed by a mill race is shown powering via a gear train two frame saws which cut rectangular blocks by the way of some kind of connecting rods and, through mechanical necessity, cranks. The accompanying inscription is in Greek.[17]

The crank and connecting rod mechanisms of the other two archaeologically attested sawmills worked without a gear train.[18][19] In ancient literature, there is a reference to the workings of water-powered marble saws close to Trier, now Germany, by the late 4th century poet Ausonius;[16] about the same time, these mill types seem also to be indicated by the Christian saint Gregory of Nyssa from Anatolia, demonstrating a diversified use of water-power in many parts of the Roman Empire[20] The three finds push back the date of the invention of the crank and connecting rod mechanism by a full millennium.[16] According to Tullia Ritti, Klaus Grewe, and Paul Kessener:

With the crank and connecting rod system, all elements for constructing a steam engine (invented in 1712) — Hero‘s aeolipile(generating steam power), the cylinder and piston (in metal force pumps), non-return valves (in water pumps), gearing (in water mills and clocks) — were known in Roman times.[21]

The crank became common in Europe by the early 15th century, seen in the works of those such as the military engineer Konrad Kyeser (1366–after 1405).[22] A rotary grindstone − the earliest representation thereof −[23] which is operated by a crank handle is shown in the Carolingian manuscript Utrecht Psalter; the pen drawing of around 830 goes back to a late antique original.[24] A musical tract ascribed to the abbot Odo of Cluny (ca. 878−942) describes a fretted stringed instrument which was sounded by a resined wheel turned with a crank; the device later appears in two 12th century illuminated manuscripts.[23] There are also two pictures of Fortuna cranking her wheel of destiny from this and the following century.[23] The first depictions of the compound crank in the carpenter’s brace appear between 1420 and 1430 in various northern European artwork.[25] The rapid adoption of the compound crank can be traced in the works of the Anonymous of the Hussite Wars, an unknown German engineer writing on the state of the military technology of his day: first, the connecting-rod, applied to cranks, reappeared, second, double compound cranks also began to be equipped with connecting-rods and third, the flywheel was employed for these cranks to get them over the ‘dead-spot’.[26]

The use of crank handles in trepanation drills was depicted in the 1887 edition of the Dictionnaire des Antiquités Grecques et Romaines to the credit of the Spanish Muslim surgeon Abu al-Qasim al-Zahrawi; however, the existence of such a device cannot be confirmed by the original illuminations and thus has to be discounted.[27] The Benedictine monk Theophilus Presbyter (c. 1070−1125) described crank handles “used in the turning of casting cores”.[28] In Renaissance Italy, the earliest evidence of a compound crank and connecting-rod is found in the sketch books of Taccola, but the device is still mechanically misunderstood.[26] A sound grasp of the crank motion involved is demonstrated a little later by Pisanello, who painted a piston-pump driven by a water-wheel and operated by two simple cranks and two connecting-rods.[26] The Italian physician Guido da Vigevano (c. 1280−1349), planning for a new crusade, made illustrations for a paddle boat and war carriages that were propelled by manually turned compound cranks and gear wheels (center of image).[29] The Luttrell Psalter, dating to around 1340, describes a grindstone which was rotated by two cranks, one at each end of its axle; the geared hand-mill, operated either with one or two cranks, appeared later in the 15th century;[30]

Medieval cranes were occasionally powered by cranks, although more often by windlasses.[31]

The crank became common in Europe by the early 15th century, often seen in the works of those such as the German military engineer Konrad Kyeser.[30] Devices depicted in Kyeser’s Bellifortis include cranked windlasses (instead of spoke-wheels) for spanning siege crossbows, cranked chain of buckets for water-lifting and cranks fitted to a wheel of bells.[30] Kyeser also equipped the Archimedes’ screwsfor water-raising with a crank handle, an innovation which subsequently replaced the ancient practice of working the pipe by treading.[32] The earliest evidence for the fitting of a well-hoist with cranks is found in a miniature of c. 1425 in the German Hausbuch of the Mendel Foundation.[33] 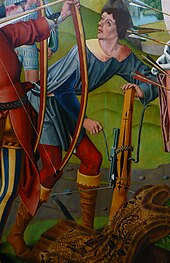 The first depictions of the compound crank in the carpenter’s brace appear between 1420 and 1430 in various northern European artwork.[25] The rapid adoption of the compound crank can be traced in the works of the Anonymous of the Hussite Wars, an unknown German engineer writing on the state of the military technology of his day: first, the connecting-rod, applied to cranks, reappeared, second, double compound cranks also began to be equipped with connecting-rods and third, the flywheel was employed for these cranks to get them over the ‘dead-spot’.

One of the drawings of the Anonymous of the Hussite Wars shows a boat with a pair of paddle-wheels at each end turned by men operating compound cranks (see above). The concept was much improved by the Italian engineer and writer Roberto Valturio in 1463, who devised a boat with five sets, where the parallel cranks are all joined to a single power source by one connecting-rod, an idea also taken up by his compatriot Italian painter Francesco di Giorgio.[34] 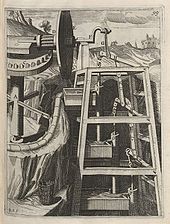 The 15th century also saw the introduction of cranked rack-and-pinion devices, called cranequins, which were fitted to the crossbow‘s stock as a means of exerting even more force while spanning the missile weapon (see right).[35] In the textile industry, cranked reels for winding skeins of yarn were introduced.[30]

Around 1480, the early medieval rotary grindstone was improved with a treadle and crank mechanism. Cranks mounted on push-carts first appear in a German engraving of 1589.[36] Crankshafts were also described by Konrad Kyeser (d. 1405), Leonardo da Vinci (1452–1519)[37] and a Dutch farmer and windmill owner by the name Cornelis Corneliszoon van Uitgeest in 1592. His wind-powered sawmill used a crankshaft to convert a windmill’s circular motion into a back-and-forward motion powering the saw. Corneliszoon was granted a patent for his crankshaft in 1597.

From the 16th century onwards, evidence of cranks and connecting rods integrated into machine design becomes abundant in the technological treatises of the period: Agostino Ramelli‘s The Diverse and Artifactitious Machines of 1588 alone depicts eighteen examples, a number that rises in the Theatrum Machinarum Novum by Georg Andreas Böckler to 45 different machines, one third of the total.[38] Cranks were formerly common on some machines in the early 20th century; for example almost all phonographs before the 1930s were powered by clockwork motors wound with cranks. Reciprocating piston engines use cranks to convert the linear piston motion into rotational motion. Internal combustion engines of early 20th century automobiles were usually started with hand cranks (known as starting handles in the UK), before electric starters came into general use.

The 1918 Reo owner’s manual describes how to hand crank the automobile:

The crank appears in the mid-9th century[disputed – discuss]in several of the hydraulic devices described by the Banū Mūsā brothers in their Book of Ingenious Devices.[39] These devices, however, made only partial rotations and could not transmit much power,[40] although only a small modification would have been required to convert it to a crankshaft.[41]

A crank axle is a crankshaft which also serves the purpose of an axle. It is used on steam locomotives with inside cylinders.\

Tags:
Crank
Next Stroke (engine)
Все записи
Previous Opposed-piston engine
Close
AutoSystemPro.com is a participant in the Amazon Services LLC Associates Program, an affiliate advertising program designed to provide a means for sites to earn advertising fees by advertising and linking to amazon.com.
Scroll To Top