In automotive engineering, an exhaust manifold collects the exhaust gases from multiple cylinders into one pipe. The word manifoldcomes from the Old English word manigfeald (from the Anglo-Saxon manig [many] and feald [fold]) and refers to the folding together of multiple inputs and outputs (in contrast, an inlet or intake manifold supplies air to the cylinders).

Exhaust manifolds are generally simple cast iron or stainless steel units which collect engine exhaust gas from multiple cylinders and deliver it to the exhaust pipe. For many engines, there are aftermarket tubular exhaust manifolds known as headers in American English, as extractor manifolds in British and Australian English,[1] and simply as “tubular manifolds” in British English.[citation needed]These consist of individual exhaust headpipes for each cylinder, which then usually converge into one tube called a collector. Headers that do not have collectors are called zoomie headers.

The most common types of aftermarket headers are made of mild steel or stainless steel tubing for the primary tubes along with flat flanges and possibly a larger diameter collector made of a similar material as the primaries. They may be coated with a ceramic-type finish (sometimes both inside and outside), or painted with a heat-resistant finish, or bare. Chrome plated headers are available but these tend to blue after use. Polished stainless steel will also color (usually a yellow tint), but less than chrome in most cases.

Another form of modification used is to insulate a standard or aftermarket manifold. This decreases the amount of heat given off into the engine bay, therefore reducing the intake manifold temperature. There are a few types of thermal insulation but three are particularly common:

The goal of performance exhaust headers is mainly to decrease flow resistance (back pressure), and to increase the volumetric efficiency of an engine, resulting in a gain in power output. The processes occurring can be explained by the gas laws, specifically the ideal gas law and the combined gas law.

Ceramic-coated exhaust manifold on the side of a performance car 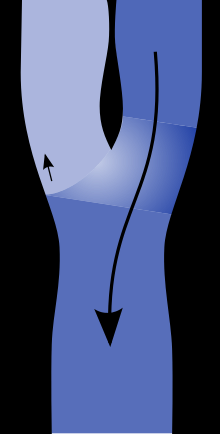 Cut through a 2-1 junction in an exhaust manifold showing pressure, which is inhomogeneous due to centripetal forces, and flow.

When an engine starts its exhaust stroke, the piston moves up the cylinder bore, decreasing the total chamber volume. When the exhaust valve opens, the high pressure exhaust gas escapes into the exhaust manifold or header, creating an ‘exhaust pulse’ comprising three main parts:

This relatively low pressure helps to extract all the combustion products from the cylinder and induct the intake charge during the overlap period when both intake and exhaust valves are partially open. The effect is known as ‘scavenging’. Length, cross-sectional area, and shaping of the exhaust ports and pipeworks influences the degree of scavenging effect, and the engine speed range over which scavenging occurs.

Great care must be used when selecting the length and diameter of the primary tubes. Tubes that are too large will cause the exhaust gas to expand and slow down, decreasing the scavenging effect. Tubes that are too small will create exhaust flow resistance which the engine must work to expel the exhaust gas from the chamber, reducing power and leaving exhaust in the chamber to dilute the incoming intake charge. Since engines produce more exhaust gas at higher speeds, the header(s) are tuned to a particular engine speed range according to the intended application. Typically, wide primary tubes offer the best gains in power and torque at higher engine speeds, while narrow tubes offer the best gains at lower speeds.

Many headers are also resonance tuned, to utilize the low-pressure reflected wave rarefaction pulse which can help scavenging the combustion chamber during valve overlap. This pulse is created in all exhaust systems each time a change in density occurs, such as when exhaust merges into the collector. For clarification, the rarefaction pulse is the technical term for the same process that was described above in the “head, body, tail” description. By tuning the length of the primary tubes, usually by means of resonance tuning, the rarefaction pulse can be timed to coincide with the exact moment valve overlap occurs. Typically, long primary tubes resonate at a lower engine speed than short primary tubes.

Some modern exhaust headers are available with a ceramic coating. This coating serves to prohibit rust and to reduce the amount of heat radiated into the engine bay. The heat reduction will help prevent intake manifold heat soak, which will decrease the temperature of the air entering the engine.

Crossplane V8 engines have a left and right bank each containing 4 cylinders. When the engine is running, pistons are firing according to the engine firing order. If a bank has two consecutive piston firings it will create a high pressure area in the exhaust pipe, because two exhaust pulses are moving through it close in time. As the two pulses move in the exhaust pipe they should encounter either an X or H pipe.

When they encounter the pipe, part of the pulse diverts into the X-H pipe which lowers the total pressure by a small amount. The reason for this decrease in pressure is that the fluid (liquid, air or gas) will travel along a pipe and when it comes at a crossing the fluid will take the path of least resistance and some will bleed off, thus lowering the pressure slightly. Without an X-H pipe the flow of exhaust would be jerky or inconsistent, and the engine would not run at its highest efficiency. The double exhaust pulse would cause part of the next exhaust pulse in that bank to not exit that cylinder completely and cause either a detonation (because of a lean air-fuel ratio (AFR)), or a misfire due to a rich AFR, depending on how much of the double pulse was left and what the mixture of that pulse was.

Today’s understanding of exhaust systems and fluid dynamics has given rise to a number of mechanical improvements. One such improvement can be seen in the exhaust ultimate power valve (“EXUP”) fitted to some Yamaha motorcycles. It constantly adjusts the back pressure within the collector of the exhaust system to enhance pressure wave formation as a function of engine speed. This ensures good low to mid-range performance.

At low engine speeds the wave pressure within the pipe network is low. A full oscillation of the Helmholtz resonance occurs before the exhaust valve is closed, and to increase low-speed torque, large amplitude exhaust pressure waves are artificially induced. This is achieved by partial closing of an internal valve within the exhaust—the EXUP valve—at the point where the four primary pipes from the cylinders join. This junction point essentially behaves as an artificial atmosphere, hence the alteration of the pressure at this point controls the behavior of reflected waves at this sudden increase in area discontinuity. Closing the valve increases the local pressure, thus inducing the formation of larger amplitude negative reflected expansion waves. This enhances low speed torque up to a speed at which the loss due to increased back pressure outweighs the EXUP tuning effect. At higher speeds the EXUP valve is fully opened and the exhaust is allowed to flow freely.