In road vehicles, the parking brake, also called[1] hand brake, emergency brake, or e-brake, is used to keep the vehicle stationary and in many cases also perform an emergency stop. Parking brakes on older vehicles often consist of a cable connected to two wheel brakes at one end and the other end to a pulling mechanism which is operated with the driver’s hand or foot. The mechanism may be a hand-operated lever, at floor level beside the driver, or a straight pull handle located near the steering column, or a (foot-operated) pedal located beside the drivers leg. In most automobiles the parking brake operates only on the rear wheels,[2] which have reduced traction while braking. Some automobiles have the parking brake operate on the front wheels, for example most Citroens manufactured since the end of World War II, and the early models of the Saab 900.

Hand brake lever from a Geo Storm. In this photo, the lever mechanism is shown not installed in the car. 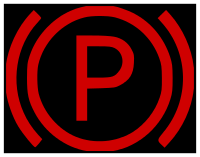 ISO symbol used to indicate that the parking brake is applied

The most common use for a parking brake is to keep a vehicle motionless when it is parked. The park brake has a ratchet or other lockingmechanism that will keep it engaged until manually released. On vehicles with automatic transmissions, this is usually used in concert with a parking pawl in the transmission. 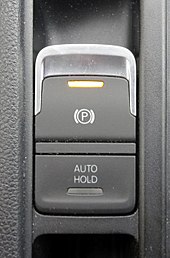 A recent variation is the electric parking brake. First installed in the 2001 BMW 7 Series (E65), electric park brakes have since appeared in a number of vehicles. Two variations are available: In the more-traditional “cable-pulling” type, an electric motor simply pulls the parking brake cable on the push or pull of a button rather than a mechanical pedal or handle in the cabin. A more complex unit [3] (first seen on the 2003 Audi A8) uses a computer-controlled motor attached to each of the two rear brake calipers referred to as the Motor on Caliper(MoC) system.

It is expected that these systems will incorporate other features in the future. Jaguar, Landrover, BMW, Renault, Subaru and VW already have a system where the parking brake engages when the engine is stopped and is released when the gas pedal is pressed. An extension of this system, called the hill-hold function, prevents roll-back when stopping and starting on a hill. The OEM can easily turn off the system. Some electric parking brakes function similar to “park” on an automatic transmission and will not engage when the vehicle is in motion, there is no emergency brake in this case.

The emergency brake was originally intended for one particular emergency and that was “no other way to stop”, as was the case when the footbrake suddenly failed due to a loss of hydraulic pressure or other issue. Drivers had to respond when brakes failed, so they were expected to learn how to stop a speeding vehicle using the emergency brake alone. Safety regulations became almost universal by 1980, so modern brake systems are very reliable, using dual-circuit hydraulics and more recently low-brake-fluid sensors.[4] As modern brakes no longer cause emergencies in normal contexts (a brake warning light comes on after the first sign of trouble) , it is no longer necessary for the average driver to learn to use this brake for emergencies.

Some drivers benefiting from the “park” function on their automatic transmissions do not use this brake at all (daily use of the parking brake is recommended, to ensure it does not seize up). After a lack of recent braking emergencies, automakers stopped using the term and started referring it by its other use, the “parking brake”, even though the ability to function at a high speed was still there. On an increasing number of modern vehicles, the parking brake can only be engaged when the vehicle is at a stop, and they no longer have an emergency brake.

The emergency brake in some cars is completely mechanical; that is, by pulling the lever, the driver pulls a cable, which in turn causes the brake shoes inside a drum brake to press against the cylinder. In a car with a completely mechanical emergency brake, the driver would be able to apply the brake even in if there was a complete loss of hydraulic pressure and a stopped engine (which would mean that there would be no power braking).

Parking brakes do not stop very well, as the stopping force provided is less than half the force of normal braking and takes much longer to stop a vehicle. Parking brakes also provide much less braking than what a car with power braking (also called “brake booster”) would provide. For vehicles with manual transmissions, the mechanical parking brake is routinely used to assist in “hill starts” (when the car is being started on a hill) as this frees both feet for use on the accelerator and clutch pedals. Even an unskilled motorist can get started without rolling backwards. It is inadvisable to use rear wheel parking brakes when the standard brakes are available, unless there is a problem with the front wheels such as a tire blowout or slippery conditions risking skidding and a loss of control. Using the parking brake while driving changes the traction balance between the front and rear of the vehicle, if over applied may lock the back wheels and skid the car into a handbrake turn.

Handbrake turns are often intentionally used in street racing and offroad rally racing to initiate rear wheel drift. In conditions near freezing where it is both wet and icy, the parking brake mechanics may freeze and be impossible to release until thawed.[5] If only using the “park” function on a transmission to hold the car parked, there is no freezing problem. The parking brake is also used to keep a parked manual transmission car from unintentionally moving when it is parked on a hill. Even though it is possible to keep a parked manual transmission car in place by putting it in gear in the opposite direction of the slope (e.g., if parking pointing downhill, put the car in “reverse”), the parking brake is still typically used, as if the engine were to lose compression, the car could roll forward. As a further precaution, some driving instructors tell students to point the wheels of hill-parked standard transmission cars towards the curb.

The hand brake lever in a Saab 9-5 automobile.

In vehicles with rear disc brakes, the parking brake either actuates the disc calipers (again, with much less force) or a small drum brake housed within the hub assembly (the inner circumference of the disc is often used instead of a separate drum).

Hudson automobiles used an unusual hybrid hydraulic-mechanical dual-brake system which operated the rear brakes through the otherwise conventional mechanical parking brake system when a failure of the hydraulic system allowed the pedal to travel beyond its normal limit.[6]

A number of production vehicles, light and medium duty trucks, and motor homes have been made with a separate drum brake on the driveline; called a transmission brake. This has an advantage of being completely independent of other braking systems. This is effective when there are multiple driving axles, all driven wheels are braked at once.

A line lock is a temporary parking brake that makes use of the vehicles standard hydraulic brakes. Often used for off road conditions stopping on steep grades. By trapping hydraulic pressure in the brake lines, all four wheels can be locked.

Large vehicles are usually fitted with power operated or power assisted parking brakes. Power assisted parking brakes are usually found on large vans as well as some older heavy vehicles. These operate in the same way as a conventional parking brakes, but pulling the lever operates a valve that allows air or hydraulic pressure or vacuum into a cylinder which applies force to the brake shoes and makes applying the parking brake easier. When releasing the parking brake, the same mechanism also provides assistance to the driver in disengaging the ratchet. Particularly on commercial vehicles with air operated brakes, this has the added benefit of making it much harder or even impossible to release the parking brake when insufficient air pressure is available to operate the brakes. A reservoir or accumulator is usually provided so a limited amount of power assistance is available with the engine off.

Power operated parking brakes are fitted to heavy commercial vehicles with air brakes, such as trucks and buses. These are usually spring applied, with air pressure being used to hold the brake off and powerful springs holding the brakes on. In most cases, a small lever in the cab is connected to a valve which can admit air to the parking brake cylinders to release the parking brake, or release the air to apply the brake. On some modern vehicles the valve is operated electrically from a lever or button in the cab. The system is relatively safe since if air pressure is lost the springs will apply the brakes. Also, the system prevents the parking brake being released if there is insufficient air pressure to apply the foot brake. A disadvantage to this system is that if a vehicle requires towing and cannot provide its own air supply, an external supply must be provided to allow the parking brake to be released, or the brake shoes must be manually wound off against the springs.

It is important to know which wheels are providing the braking action when lifting the car with a jack, for example when a motorist is changing a flat tire. Usually the rear wheels are stopped with parking brakes. Most Citroens, the Alfasud, Saab 99s, early 900s, and most early Subarus applied the parking brake force to the front wheels, which makes them notable exceptions. If one lifts the braking wheels off the ground then the car can move and fall off the jack. This could injure persons who are underneath or near the car. This is the reason manufacturers recommend jacking be conducted on level ground and with chocks immobilizing the wheels that will remain on the ground.

Virtually all railroad rolling stock is equipped with manually operated mechanical hand brake devices that set and release the brakes. Most of these involve a chain linked to the brake rigging, most often at the brake cylinder, that when tightened pull the piston out against the releasing springs, thus applying the brakes on the car (if there is only one brake cylinder per car) or bogie (if there is more than once cylinder per car). Newer locomotives have electric systems that simply place an electric motor in place of the chain winding mechanism. This brake acts independent of the action of the automatic air brakes, which function collectively when coupled in a train and are under the control of the locomotive driver / engineer.

Manual hand brakes serve to keep a piece of rolling stock stationary after it has been spotted in a rail yard or at a customer for unloading or loading. They are also used to secure a parked train from inadvertent movement, especially while unmanned.

Before the development of locomotive-actuated train braking systems in the late 19th century, designated railroad employees known as brakemen would move about the tops of cars, setting hand brakes in an effort to stop the train in a timely manner. This process was imprecise and extremely dangerous. Many brakemen lost life and limb as a result of falling from a moving train, icy and wet conditions often adding to the hazards involved in negotiating the top of a swaying boxcar.[7] In the U.S., an 1893 federal law, the Railroad Safety Appliance Act, required automatic brakes on all railroads, effective in 1900.[8]