A pressure wave supercharger (also known as a wave rotor[1]) is a type of supercharger technology that harnesses the pressure waves produced by an internal combustion engine exhaust gas pulses to compress the intake air. Its automotive use is not widespread; the most widely used example is the Comprex, developed by Brown Boveri.[2][3][4] Valmet Tractors of Finland were one of the first to use the device when they fitted it to the 411CX engine which powered their 1203 model of 1980. Although it provided a useful increase in performance it was considered too expensive to be incorporated into later models. [5] Ferrari tested such a device during the development of the 126C Formula One car. The system did not lend itself to as tidy an installation as the alternative twin-turbocharger layout, and the car was never raced in this form.[6] A more successful application was in the RF series diesel enginefound in the 1988 Mazda 626 Capella; ultimately 150,000 Mazda diesel cars were fitted with a Comprex supercharger. Other users included Peugeot and Mercedes-Benz. The Greenpeace SmILE concept car uses a Hyprex pressure wave supercharger developed by the Swiss company Wenko AG.[4] NASA uses wave rotors in experiments attempting to increase gas turbine efficiency. The wave rotor is placed between the compressor, combustor, and turbine sections in order to extract more energy from the combustion process.[7][8] 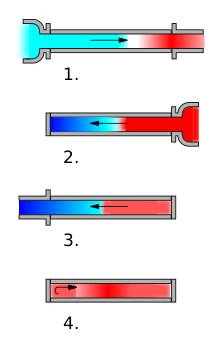 The 4 cycles of operation of the Pressure Wave Supercharger.

Energy exchange in the pressure-wave supercharger occurs at sound velocity, resulting in good response even at low engine speeds, a common downfall of turbocharged engines. It combines the advantages of mechanical and exhaust gas supercharging.

The Comprex system has two shortcomings; one, that the exhaust gases intermingles with the fresh air needed for combustion, leading to some recirculation of burnt gas. Secondly, this co-mingling also raises the temperature of the intake gas. Both of these are much less of a problem in a diesel than a petrol engine, hence the Comprex’s rarity in petrol-engined applications.[9][10]

Tags:
Turbocharger
Next Exhaust manifold
Все записи
Previous Core plug
Close
AutoSystemPro.com is a participant in the Amazon Services LLC Associates Program, an affiliate advertising program designed to provide a means for sites to earn advertising fees by advertising and linking to amazon.com.
Scroll To Top