Snow tires—also called winter tires—are tires designed for use on snow and ice. Snow tires have a tread design with bigger gaps than those on summer tires, increasing traction on snow and ice. Such tires that have passed a specific winter traction performance test are entitled to display a “Three-Peak Mountain Snow Flake” symbol on their sidewalls. Tires designed for winter conditions are optimized to drive at temperatures below 7 °C (45 °F). Some snow tires have metal or ceramic studs that protrude from the tire to increase traction on hard-packed snow or ice. Studs abrade dry pavement, causing dust and creating wear in the wheel path.[2] Regulations that require the use of snow tires or permit the use of studs vary by country in Asia and Europe, and by state or province in North America.

Related to snow tires are those with an M+S rating, which denotes an “all-season” capability—quieter on clear roads, but less capable on snow or ice than a winter tire.[3]

Snow tires operate on a variety of surfaces, including pavement (wet or dry), mud, ice, or snow. The tread design of snow tires is adapted primarily to allow penetration of the snow into the tread, where it compacts and provides resistance against slippage.[4] The snow strength developed by compaction depends on the properties of the snow, which depend on its temperature and water content—wetter, warmer snow compacts better than dry, colder snow up to a point where the snow is so wet that it lubricates the tire-road interface. New and powder snow have densities of 0.1 to 0.3 g/cm3 (6 to 20 lb/cu ft). Compacted snow may have densities of 0.45 to 0.75 g/cm3 (28 to 47 lb/cu ft).[5]

Snow or ice-covered roadways present lower braking and cornering friction, compared to dry conditions. The roadway friction properties of snow, in particular, are a function of temperature. At temperatures below −7 °C (20 °F), snow crystals are harder and generate more friction as a tire passes over them than at warmer conditions with snow or ice on the road surface. However, as temperatures rise above −2 °C (28 °F), the presence of free water increasingly lubricates the snow or ice and diminishes tire friction. Hydrophilic rubber compounds help create friction in the presence of water or ice.[6] 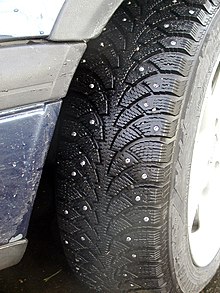 Attributes that can distinguish snow tires from “all-season” and summer tires include:[6]

Snow tires are designed to encounter many of the same conditions that summer tires encounter, as well, so they incorporate siping for wet surfaces. Wet-film conditions on hard-compacted snow or ice require studs or chains.[6]

Many jurisdictions in Asia, Europe and North America seasonally allow snow tires with metal or ceramic studs to improve grip on packed snow or ice. Such tires are prohibited in other jurisdictions or during warmer months because of the damage they may cause to road surfaces.[7] The metal studs are fabricated by encapsulating a hard pin in a softer material base, sometimes called the jacket. The pin is often made of tungsten carbide, a very hard high performance ceramic. The softer base is the part that anchors the stud in the rubber of the tire. As the tire wears with use, the softer base wears so that its surface is at about the same level as the rubber, whereas the hard pin wears so that it continues to protrude from the tire. The pin should protrude at least 1 millimetre (0.04 in) for the tire to function properly.[8] Snow tires do not eliminate skidding on ice and snow, but they greatly reduce risks.[9]

Studdable tires are manufactured with molded holes on the rubber tire tread. Typically, there are 80 to 100 molded holes per tire for stud insertion. The insertion is done by using a special tool that spreads the rubber hole so that a stud jacket can be inserted and the flange at the bottom of the jacket can be fitted nicely to the bottom of the hole. The metal studs come in specific heights to match the depths of the holes molded into the tire tread based on the tread depths. For this reason, stud metals can only be inserted when the tires have not been driven on. A proper stud insertion results in the metal jacket that is flush with the surface of the tire tread having only the pin part that protrudes.[10]

When studs come into contact with pavements they abrade the asphalt or concrete surface. This can result in creating polluting dust and wear in the wheel path that prevents proper drainage. For this reason, studded tires are banned, at least seasonally, in many jurisdictions.[11]

The compacted snow develops strength against slippage along a shear plane parallel to the contact area of the tire on the ground. At the same time, the bottom of the tire treads compress the snow on which they are bearing, also creating friction. The process of compacting snow within the treads requires it to be expelled in time for the tread to compact snow anew on the next rotation. The compaction/contact process works both in the direction of travel for propulsion and braking, but also laterally for cornering.[5]

The deeper the snow that the tire rolls through, the higher the resistance encountered by the tire, as it compacts the snow it encounters and plows some of it to either side. At some point on a given angle of uphill pitch, this resistance becomes greater than the resistance to slippage achieved by the tread’s contact with the snow and the tires with power begin to slip and spin. Deeper snow means that climbing a hill without spinning the powered wheels becomes more difficult. However, the plowing/compaction effect aids in braking to the extent that it creates rolling resistance.[5]

ASTM International (American Society for Testing and Materials International) is an international standards organization that develops and publishes voluntary consensus technical standards for a wide range of materials, products, systems, and services. The pertinent standard for snow tires is ASTM F1805 – 16, Standard Test Method for Single Wheel Driving Traction in a Straight Line on Snow- and Ice-Covered Surfaces, which assess tire performance on snow and ice. It measures the traction of tires under acceleration in the rolling direction.[13] Tires that pass this test are entitled to display the 3PMSF (Three-Peak Mountain Snow Flake) symbol.[14]

In Russia light vehicles and buses must be equipped with snow M+S or 3PMSF tires on all axles from December through February and have a minimum tread depth of 4 millimetres (0.2 in).[15]

All prefectures of Japan, except for the southernmost prefecture of Okinawa, require the motorized vehicles to be fitted with winter tires or tire chains if the road is icy or slushy.[16] If tread grooves of snow tires are worn off for more than 50% of its original depth, tires must be replaced to meet the legal requirements. Drivers will be fined for failing to comply with the snow tire or tire chains requirements. Nationwide studded tire restrictions for passenger vehicles came in effect in April 1991, followed by restrictions for commercial trucks in 1993.[17] Studded tires are technically still legal in Japan, but the usage is restricted by environmental law and it is a criminal offence to operate a vehicle fitted with studded tire on dry asphalt or concrete.[17] 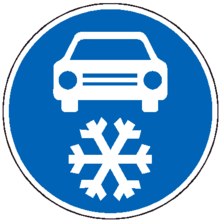 A Czech Republic road sign Winter equipment, which mandates the use of snow tires in the winter

As of 2016, European regulations pertaining to snow tires varied by country. The principal aspects of regulations were whether use was mandatory and whether studded tires were permitted.[15]

The U.S. National Highway Traffic Safety Administration (NHTSA) and Transport Canada allow display of a 3PMSF symbol to indicate that the tire has exceeded the industry requirement from a reference (non-snow) tire.[19][20] As of 2016, snow tires were 3.6% of the US market and 35% of the Canadian market.[21]

US states and Canadian provinces control the use of snow tires. No state[22] or province (except for Quebec) requires snow tires.[23] They may require snow tires or chains only in certain areas during the winter:

The use of studded tires is regulated in the United States and Canada by individual states and provinces, as follows:[27]

Tags:
Tyres
Next Tire manufacturing
Все записи
Previous Tire code
Close
AutoSystemPro.com is a participant in the Amazon Services LLC Associates Program, an affiliate advertising program designed to provide a means for sites to earn advertising fees by advertising and linking to amazon.com.
Scroll To Top