The tread of a tire or track refers to the rubber on its circumference that makes contact with the road or the ground. As tires are used, the tread is worn off, limiting its effectiveness in providing traction. A worn tire can often be retreaded.

The word tread is often used casually to refer to the pattern of grooves molded into the rubber, but those grooves are correctly called the tread pattern, or simply the pattern. The grooves are not the tread, they are in the tread. This distinction is especially significant in the case of racing slicks, which have a lot of tread but no grooves.

The grooves in the rubber are designed to allow water to be expelled from beneath the tire and prevent hydroplaning. The proportion of rubber to air space on the road surface directly affects its traction. Design of tire tread has an effect upon noise generated, especially at freeway speeds.[1] Generally there is a tradeoff of tread friction capability; deeper patterns often enhance safety, but simpler designs are less costly to produce and actually may afford some roadway noise mitigation. Tires intended for dry weather use will be designed with minimal pattern to increase the contact patch. Tires with a smooth tread (i.e., having no tread pattern) are known as slicks and are generally used for racing only, since they are quite dangerous if the road surface is wet.

Snow tires or Winter tires are tires designed for use in colder weather, snow and ice. To improve traction, they are made of different rubber and have a different tread pattern from regular street tires.

Studded mountain bike tires for use in icy conditions.

Off-road tires used in mud or dirt feature individual knob patterns to allow the tire to bite into the surface and lever the sides of the tread to get a better grip. Given the smaller contact patch, these tires tend to wear quickly when used on asphalt.

Mountain bike and some motorcycle tires feature tread similar to off-road tires used on cars and trucks but may sometimes include an unbroken tread that runs along its center. This feature provides better traction and lower noise on asphalt at high tire pressure, but retains the ability to provide grip on a soft or loose surface- lower tire pressure or soft ground will cause the side lugs to come into contact with the surface. Road bike tires may have shallow grooves for aesthetic purposes, but such grooves are unnecessary in narrow applications.[2] 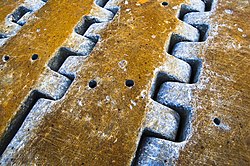 The tread of a construction machine’s tracks.

Continuous tracks such as those used on military tanks or construction machines (i.e. caterpillar tracks) have metal track segments which may be rubber-coated. They usually do not feature tread patterns, because these would offer little additional grip given the weight of the tracked vehicle. Traction is usually provided by grousers instead.

Tags:
Tyres
Next Tire
Все записи
Previous Tire manufacturing
Close
AutoSystemPro.com is a participant in the Amazon Services LLC Associates Program, an affiliate advertising program designed to provide a means for sites to earn advertising fees by advertising and linking to amazon.com.
Scroll To Top